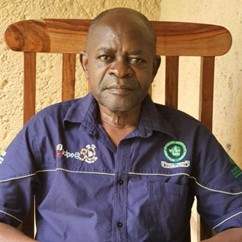 The biological control community has lost a leading figure in invasive weeds’ control, Godfrey Pasurayi Chikwenhere. He will be affectionately remembered by his colleagues as a dedicated and passionate entomologist whose love for research knew no bounds. He was a jovial and light hearted character whose demise will forever remain in the hearts of many. During his 36 years as a researcher, he pioneered classical biological control programmes in Zimbabwe particularly on floating invasive aquatic macrophytes. Over these years, Godfrey contributed to the introduction of biological control agents for several aquatic weeds in Zimbabwe, including the water hyacinth (Pontederia crassipes), Kariba weed (Salvinia molesta) and water lettuce (Pistia stratiotes) on Lakes Chivero and Kariba. He also participated in the inaugural International Organization for Biological Control Working Group Meeting for the Biological and Integrated Control of Water Hyacinth which was held in Zimbabwe in 1998. During these early days, Godfrey also worked with both arthropod and non-arthropod pests including quelea birds, rodents and migratory insects such as locusts and armyworms. In addition, Godfrey also had interests in postharvest entomology and technologies for grain and related products’ protection and worked on a diversity of postharvest insect pests of grains, (including wheat, maize and related), tobacco, sugarcane and forestry products. As the deputy focal person for the National Plant Protection Organisation of Zimbabwe, he also worked to prevent the spread of plant pests and diseases through trade.

Godfrey joined the Plant Protection Research Institute in Zimbabwe on 01 October 1986 as a Research Officer. He attained his PhD in Entomology from the Royal Veterinary and Agricultural University, Copenhagen, Denmark in 2000, specialising in the biological control of aquatic weeds.  In 2007, he moved to the Lowveld Research Institute in Chiredzi as Head of Station before returning to the Plant Protection Research Institute in 2009. He was later reassigned as Deputy Director in the Research Services Department a position he held until his untimely death. During his career, Godfrey mentored PhD, MSc and BSc students, published peer and non-peer reviewed articles mainly on biological control of invasive alien plants. Furthermore, he served as an executive member of several bodies including CropLife Zimbabwe, Crop Science Association of Zimbabwe, International Red Locust Control Organization and chaired the Invasive Alien Species National Committee for Zimbabwe.

Godfrey passed away on the 2nd of July 2022. Our thoughts are with his wife, children, and many of his close friends and colleagues.